Craiglockhart Residents say No to the Plans

Posted on December 1, 2012 by friendsofcraighouse

On Tuesday night,  27 Nov, a packed meeting organised by Craiglockhart Community Council brought to the fore overwhelming local anger over the recent planning application submitted by The Craighouse Partnership for the redevelopment of Craighouse Campus.

Everything these days seems to be recorded “live as it happens” on Twitter and this meeting was no different, the first tweets being posted just as the meeting started:

“At Craiglockhart Community Council meeting, where objections to proposed development of Craighouse Campus will be heard. Around 200 here”.

The local interest was clearly intense with an attendance probably 10 times or more that of an average Craiglockhart meeting.  In another early tweet, local councillor Gavin Corbett noted

Craiglockhart Community Council had rightly billed the meeting with the promise “We want to inform you as residents of the proposals and in turn receive feedback from you so that we can onward report your collective views to the City Council” . They certainly received feedback, and the collective views of those who attended should provide a powerful message for the community council to report on to the City Council.

These newbuild blocks would take out woodland 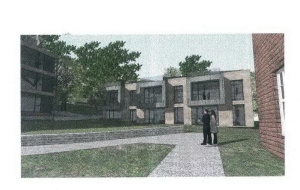 A representative from Edinburgh’s Civic Trust, The Cockburn Association, Euan Leitch, was invited to speak and explain the planning proposals. One of the primary objectives of the Cockburn is:

and with their remit and knowledge and experience of historic and heritage sites, they were a good choice to present the plans. Euan Leitch’s task was not an easy one to carry out without showing bias for or against, but it was pretty much appreciated that a balanced explanation was achieved and the format of having an outside independent yet knowledgeable individual there to answer questions was a very good call by The Craiglockhart Community Council.

Murmurs of discontent over the plans were audible throughout the presentation, particularly as maps of the proposed areas for new build flashed across the screen and also when the images of the new buildings were displayed.

Dave Owen tweeted with astonishment that:

The “Boilerhouse Villas” to be put on the ridge above Meadowspot

“The developers’ rendered images of what they want to do with #Craighouse make it look like the University of Milton Keynes in 1988”.

In a key moment, there were gasps around the room as the audience saw the 8 storey tower block proposed for the top of the site. Local Councillor Gavin Corbett tweeted:

Then, it was onto questions and comments from the residents and they didn’t hold back. Residents voiced deep concern over the precedent that was being set for other protected sites in Edinburgh. Euan replied that although planners will say there is not a precedent, that developers would always argue on precedent.

People were concerned about The Craighouse Partnership’s dereliction threats. Someone from the floor said that this was a nonsense and that Edinburgh City Council has the power to force the owners to maintain the existing buildings to avoid this sort of scenario. Euan Leitch agreed that Edinburgh Council does indeed have such powers. Another resident said that the Council should be pressured to do this.

There was deep worry from residents that there was a very real risk that the development could go ahead and not complete – leaving not just the fear of dereliction but risk of dereliction plus a ruined building site with restricted access into the bargain. Journalist Joanna Blythman warned that Craighouse could repeat Quartermile’s situation – old buildings derelict and empty new flats.

Another resident brought up the issue of the 2 metre high metal mesh fence through the woodland – “like a prison”.

Another resident said it looked like a speculative bid that had just been pushed through.

“What trumps conservation?” one resident asked. (As Dave Owen tweeted: ““Trump” is perhaps a loaded verb in this country”)

MSP Alison Johnstone wanted to know about cars and carparking – where are the 323 car-parking spaces going to go? Where is the commitment to bicycles and public transport – the car-parking alone would completely alter the nature of this beautiful site.

Of everyone who spoke at the meeting – all, except for one person, spoke out strongly against the plans.

Twice, there was a call for a vote to be taken. But this opportunity was turned down by the Chair.

But the conclusion was unavoidable.

“Much opposition to loss of this protected site,” tweeted MSP Alison Johnstone.

But it was left to Councillor Gavin Corbett who summed it all up:

“Well that was pretty clear-cut. At Craiglockhart CC packed meeting on #Craighouse only one resident spoke in favour of the plans”

Old Craig through the apple tree. The setting of Old Craig would be ruined by these plans and this tree would be chopped down along with many others.

A local group wanting to preserve the beautiful Craighouse Campus site in Edinburgh.
View all posts by friendsofcraighouse →
This entry was posted in Uncategorized. Bookmark the permalink.

1 Response to Craiglockhart Residents say No to the Plans