The Friends of Craighouse launched its petition today.  We were meaning to bring you lots of entertaining photographs – setting up the stall, the posters laid out, the clipboards…as it was, people were coming up to us and wanting to know more before we managed to get the stall fully up and running! So photographs rather slipped from our minds. However, here is a picture of people gathered around our little table to find out more.

I am delighted to announce that we collected 582 signatures in just one day! Whoop!

I would like to thank all the volunteers who gave their time. Thank you so much everyone! It’s made a fantastic impact already and an incredible response. 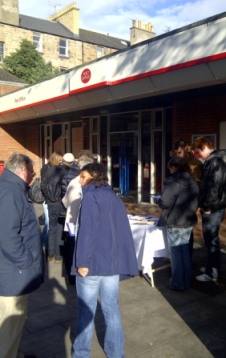 Some members of the public even rushed home to collect members of their family to sign also and others, seeing the poster and, being very familiar with the site, rushed over to lend their support.

Many people were shocked about the sheer amount of new build the developers are pushing. 160,000 sq feet of new-build – more than the listed buildings put together. Many people – even those that had gone to the exhibitions – had not understood that 3 storey development was being proposed for one of the most beautiful parts of the site, the orchard (see below) – many thought this area simply couldn’t be built on and had assumed it was safe. Many were shocked at the sheer size of the development area across the carpark, adj green space and woodland. And many had simply not really taken in that there are a number of 3 or 4 storey apartment blocks that the developers want to dot around the listed buildings.

The orchard - under threat from 3-storey housing

I spoke to a lot of people who expressed anger about Head of Planning John Bury’s comments about access in a letter sent out to the residents of Morningside by Ian Murray MP. In it, Bury claimed that the developers were under “no obligation” to retain free access as there had only been access to the site since the 90s, when Napier took over. We met a lot of people today who had been very familiar with the site before Napier’s time, when it was a hospital, who told us that this was just untrue, that the site was accessible long before Napier took over. Many people told us they had been accessing and enjoying the grounds – including the areas proposed for newbuild development – since they were small children.

It was wonderful to hear people’s stories about Craighouse.

Thanks again to all our volunteers and all the people in Morningside today who engaged us in interesting conversations and who signed the petition to oppose these proposals and to preserve the green space and woodland of this historic site.

This is a special place and I would ask anyone who is unfamiliar with it or what it represents to come to the site and take a walk around the grounds with a map to see exactly what the developers are proposing. I think you will get a shock.

This entry was posted in Petition. Bookmark the permalink.