How to Object – Less Than a Week to Go! 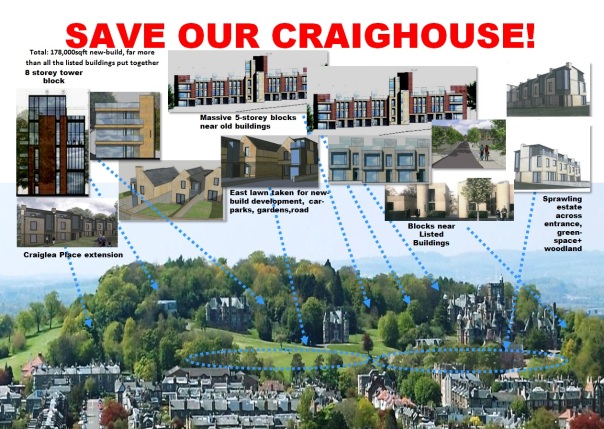 It’s not hard to object – the easiest is probably to just drop a quick email to Emma Wilson:

Remember: put the planning reference no: 12/04007/FUL  address: Napier Campus  Craighouse  as well as your name, address and the date.

Just express your opinion in your own words on why you object. If you can include some of the material planning considerations that we have set out below – it will have more power in planning terms.

Example of a simple objection:

‘I would like to object to the development at Craighouse (12/04007/FUL). The newbuild development goes against planning policy and is against The Edinburgh Local Plan. [name and address]’

1. Contrary to Policy: Contrary to the Edinburgh Local Plan and other Scottish Gov planning policies.

2. Excessive & Unjustified New Build Sprawl: the site is heavily protected for its beauty, historic significance, and support of wildlife. They should not be putting new-build across it.

3. Ruining Setting of Grade-A Listed Buildings: the new build spoils the setting of the existing Grade-A listed buildings. Old Craig will be obscured by a housing estate and New Craig and the villas dominated by blocks. The site’s character as a city landmark will be spoilt from viewpoints around the city.

5. Public Amenity: The public will lose their much-loved open space, beautiful woodland and views. Areas where children play football will be destroyed, along with open parkland and many traditional walks. The high numbers of traffic and more roads will make it less safe, peaceful and natural.

6. Loss of Open Space. Craighouse is not designated for housing in the Local Plan and is a highly protected site of Open Space. Edinburgh Council are obliged to protect Open Space whether publicly or privately owned. So, according to policy, Craighouse should not be built on.

7. Craighouse is an Area of Great Landscape Value and Nature Conservation Site. These plans do not enhance the landscape – quite the contrary: they destroy the landscape character.

8. Local Traffic and Parking: 323+ extra vehicles will cause congestion on local roads already at capacity.

9. Cars/Parking onsite: roads/car-parks for 323 cars will turn green Open Space to tarmac against policy. This plus the traffic on site will spoil the character of the site, contrary to the conservation area policy.

10. Schooling: the new residential development will create an unsustainable strain on local schools, for which there is no possibility of enlargement (even with further funding, which is rarely sufficient from any new developments).

11. Flooding on Balcarres St: The extra car-parks and buildings will lead to increased flood-risk.

12. Trees: the plans see significant removal of mature trees and woodland, protected in a Conservation Area

13. Wildlife: The site is the habitat of local wildlife and the development proposal areas are the habitat of protected species such as bats and badgers. As a Local Biodiversity Site, the wildlife should be especially protected here.

14. Views and Skyline: The proposals will spoil the spectacular views into and out of the site. Protected views from the orchard to the castle will be foregrounded by sprawling housing estate with more housing ruining the views to the East. Views from outside of the site (such as from Blackford Hill or Arthur’s Seat) will be spoilt with new buildings obscuring or overwhelming the current Grade A listed buildings.

15. Precedent: This amount of new-build is in contravention of the Local Plan, the numerous protections and policies creates a dangerous precedent for Edinburgh’s other historic sites and green spaces.

REMEMBER:   Write to the Council Planners by letter, email or by the Planning Portal and object to application number:  12/04007/FUL by the 21st of December.